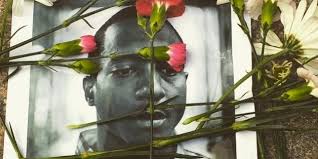 If you have not already, I urge you to watch TIME:  The Kalief Browder Story, available in NETFLIX. It is worth you time, effort and energy to watch what happens with young black men in the prison industrial complex encounter, as well as it’s long lasting, far reaching  effects.

Kalief Browder was incarcerated  for 3 years without trial, advocate, or bail on Riker’s Island. He was accused of stealing a backpack with all its contents including money ($700), a camera, credit card and an iPod Touch at age 16 (which he denied). In those three years, he was treated worse than an animal, his mother’s health failed, and he spent  more time in solitary confinement than is recommended or could be tolerated (2 years).  Upon his release at age 19, he was arrested again with his brother over a minor infraction (read:  racial profiling),  and in 2013 began a continuation of suicide attempts which began while in Rikers. Hear Kalief’s own words:

“People tell me because I have this case against the city I’m all right. But I’m not all right. I’m messed up. I know that I might see some money from this case, but that’s not going to help me mentally. I’m mentally scarred right now. That’s how I feel. Because there are certain things that changed about me and they might not go back.” He also said, “Before I went to jail, I didn’t know about a lot of stuff, and, now that I’m aware, I’m paranoid. I feel like I was robbed of my happiness.”[26]

What we must understand as we delve into this realm of mental health as it relates to black children and suicide is the effect of early interaction with the prison industrial complex. It is not often considered that black children have depression, are susceptible to this condition when there are none or not adequate resources. In the case of Kalief, it can be seen in hindsight, just how much he was suffering –and also how the world outside of Brooklyn still seemed not to care.

One of the most troubling things, aside from the fact Kalief’s father had the bail money to get him out of Rikers, and for his own logic would not help is son, is what he told his mother:

In these six words, Kalief has and have given voice to what most black children cannot dream to utter for fear of seeming weak or soft. The time Kalief spent away from his mother, his family and all he knew, he was in a state where no one could reach him, free him or help him. From that new soil, grew loneliness, anxiety, despair and hopelessness. How could the fruit not be suicide or suicidal ideation?

In the life of Kalief Browder, and the lessons we rummage through, we cannot ignore the environment which this was allowed to flourish. Poverty, lack of resources (money and employment), racism and its profiling, undiagnosed mental illness played part in allowing Kalief to think there was no hope in the better for his life. When he thought he would be better, get better, feel better–those same ghosts arose and found him out. Unable to cope, he did what he had tried to do in 2012. And was successful…

In his death, we see more of what he endured. We see the need of mental health services in the life of those young, and old, who are found in the clutches of the prison industrial complex! We see what happens when we ignore what we believe is common and well with children of color:  trauma.

Trauma untreated are emotional and social cancers. They can only be such. Black children should not be made martyrs of trauma and their sole keepers. Their tears are valuable, their situations must be understood, and there words must be unfettered. They must be allowed to heal and be heard.

In being heard, we can translate their fury and rage and sorrow to action and compassion. We must be able to listen, and hear to understand. We must take the cries silent tears as lion roars–unmistakable and important. Our children depend on our ears. We cannot afford to keep failing them.