Kimberly Denise Jones is my girl! From Junior MAFIA to The Notorious K.I.M. to The Naked Truth, I adored Lil Kim. I loved how unapologetic she was, and how fashionable! No Matter What People Say, is still my anthem! It was because of Lil Kim I wanted the big Jackie O oversized Chanel glasses–and only wear over-sized sunglasses! To see her change as much as she has–is devastating. Granted, she has the money to do what she wants, and dare a mofo to say something–but sis! Did you not think we weren’t going to see the difference? Sigh.

I was a huge baseball fan, and I remember the summer of 1998 when the race to 62 happened between Sammy Sosa and Mark McGuire! I remember how excited I was watching local games, and games on ESPN and cheering. I remember seeing Sammy Sosa run out to his position in Wrigley Field, and playing like Mr. Cub himself Ernie Banks said, “Baseball is a man’s game, but you have to have a lot of little boy in you too.” I remember watching that year’s All-Star Game, watching Sammy in all his unapologetic Dominican blackness, the little black girl in me rejoiced as the camera caught him speaking Spanish. My father and Sammy Sosa had the same complexion! It was dope to see him just running through this game doing what he loved. Seeing what he has become since then? 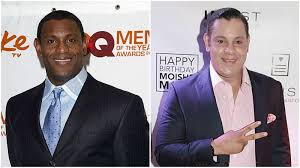 I had nothing. I legit had NOTHING. I don’t understand. I remember I was watching  a special on ESPN and heard his voice before I ever saw him, and damn near screamed. I didn’t know who TF this white man was! I promise I didn’t! I was devastated. Luvvie Ajai said it this way, “He looks like he wants to take my health care.” Accurate!

My heart broke. It broke—I couldn’t understand why he would do this to himself. I didn’t understand why as pretty as Lil Kim was before drastic surgery, she would do this! Didn’t she know how many black girls looked at her, saw her as still pretty, how we all remember her as the powerhouse she always was? Then, I had to remember the time when I looked in the mirror and hated what I saw.

I had to remember what I went through when I wanted to be lighter, believing that would help everything! When I remembered, I cried. I can’t imagine what it was like for Kimberly Denise when she had to stop being her stage persona. Kim admitted in an old interview there were black men she was involved with whom told her that she wasn’t as pretty as a lighter skin girl, or a girl of different nationality. She was good enough to bang, but not adequate to keep. When the Notorious B.I.G. biopic, Notorious, came out in 2009 (don’t even get me started on him and how he did her and Faith!), Kim remarked that she wished they had gotten a Latina woman or lighter skinned black grin to play her.

I can’t imagine what they went through–the heat of celebrity on top of personal, unwarranted, vicious critique. A critique, an assault so vicious, the only way to stop it is to change what is immutable about yourself.

I could go on and be cliched and saged at the same time talking about self-loathing, and the like. Here–it is not fitting. All I have are observations, warning and sympathies. My observations:  colorism is real, the brown bag test is still active, and no amount of money can erase or settle insecurities. My warning:  Be careful what you believe about yourself, and the weight of words spoken over you, to you or about you. My sympathies are far reaching–and tear-soaked. The all-white world desires to stamp out and subdue any peek of color. It craves conformity, obedience and worship.

In regaining, holding on to the knowledge of self, refusing to subdue or change your opinion of self, you edify what is within you. The thing about you which you know better than any friend and deeper than any enemy. However, it is understood that onslaught, these avalanches, of never feeling enough, may stop once you begin to yield to changes. Little things, big things, erasing your identify for the peace granted by people you halfway like is ludicrious.

The only thing you take with you when you leave this world is you.

Don’t make your row tougher, because you’re afraid of what people say.