Someone shared these words in a form of a meme over a year ago on my Facebook wall. The same meme came back through my memories a few weeks ago, and I re-shared it, not knowing it would receive as many “likes” and “hearts” as it did.  I do not typically post things on Facebook to get attention from people, but this post? It seemed to get people’s attention.

Black men and boys have been magnets of negativity for centuries in this country. We have been used from manual labor by slave owners, profit for owners of private prison systems, for negative statistical data in unaccredited school districts, by police as shooting practice.

Some of us have been used by our mothers as the “man” they coddle, spoil and “love on” so much that some of us are unable to love another woman besides “Momma.”

Now in 2018, black men remain of magnets negativity! This is more apparent in the realm of relationships–which brings me to this point:  let’s talk about black men who find themselves in relationships with white women! 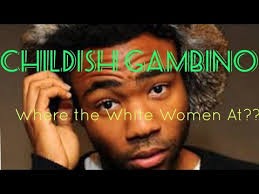 Let’s go back to beginning of May.

Donald Glover, as his musical alter ego, Childish Gambino, released his This is America video. My wife (who by the way is beautiful, black and intelligent) in a way that she only could, asked me to watch the video with her.  She knows our taste in music are on two different sides of the spectrum, but because I love her, I watched it video.

At the beginning of the video, he shoots another guy in the head, which at that point I was triggered: I did not want to watch anymore of it.  She encouraged me to keep watching.  At the end of the video,I found myself thinking how accurate the video was in depicting life for most people of color in this country (If you have not seen his video, I strongly encourage you to do so). It forces us as people of color to truly think and to have a much-needed tough conversations about the issues depicted.

I will freely admit I had no clue who Donald Glover was until his video came out followed by his guest appearance on Saturday Night Live the night before the video was released.

In the midst of our excitement and pride, we as black people were celebrating and high-fiving one another over Mr. Glover’s success of his video, many of us found ourselves clinching our pearls when it was revealed Donald Glover has been in a serious long-term committee relationship with a white woman! And to make matters worse? They have two children together (the audacity!)!

Let me let you in on a little secret:  there has been interracial dating and marriage going on for centuries! It’s even in the Bible–but that’s a whole another post for a different day.

I want to focus on black men, and why black men seem to be on the chopping block for desiring to date outside their race at present. As a black man, I have heard all the different stereotypes as to why black women or being overlooked by black men.

For the record, I have always loved and admired everything about black women.  However, the black women I liked, crushed on, or admired from afar, when bold enough to engage with?  They did not love and admire everything about me.  This became more evident when I graduated college and went off into the real world.

It has been told to me on numerous occasions by black women whom I was trying to date, or be seen with, I was not the typical black man. I did not fit the mold of what they thought I should be as a black man:  I was not athletic. I did not sound like I was black. I did not wear my clothes a certain way. I did not drive a certain car, I did not listen to rap or hip-hop. I did not eat certain foods and so on…(You get the point.).

I got tired of being rejected by black women so I gravitated towards white women. Then I found myself in situations where those same black women who rejected me now suddenly were pissed off at me because I was dating “Rachel”, “Ally” and “Mallory.” I remember the glares, the eye rolling, the head shaking and the verbal altercations!  I have been there!

My wife–that beautiful, black and intelligent women whom I spoke of earlier–is the first black woman I have ever been with. I love her dearly and will fight several mofo’s over her if I need to!

In Donald Glover’s situation, and to any other black man who desires to date a white woman, I say this:  it’s their prerogative and their decision. Nowhere is it written that a black man needs written and verbal permission to date someone whom is not black.

We need to let Donald Glover be happy with his bae! He has already proven that he is for black people.  I think he made that evident in his music video.

Him being with a white woman doesn’t negate him being black!

Whom he desires to be with should have no ramifications on his blackness.

As a word of wisdom to black men if desire to date, or eventually marry someone whom is not black, I offer this:

The Sunken Place is a real thing, and harder to get out of than you think. Just as the dude who wrote a song saying Jesus Walks, but now wears MAGA hats, calls himself Yeezus all while unaware his legacy is being auctioned off at the Armitage property.

You, as a black man, are entitled to be happy. With whom you want to be happy with! Remember, you define who you are as a black man. And the woman you pick, needs to be okay with you–black or otherwise.