I had to be about six or seven when I had heard of the Headless Horseman. As with all things spooky, Disney tried its hand at this first, trying to make fun of the story as it were. However, with the special breed of child that I was, this did nothing for me. I remember being horrified and fascinated. That feeling has not dissipated as it relates to this story.

I am aware Washington Irving is part of the first wave of American writers. I know that he put forth the genre known as Romanticism. I know this piece is one of that helps to identify what gothic horror is. I also know, from the vantage point of being a writer, The Legend of Sleepy Hollow is a powerful work! It is complex, it is imagery-laden, and its scary AF.

To show you how good the work is, FOX did a show based on it! It indeed was something  amazing! I love a show that can take a good work as a roux and add to it with better writing! 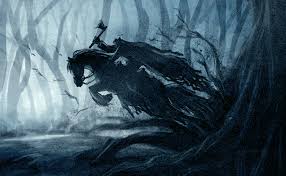 But the thing that scared me about this story? There was what amounted to a headless demon roaming upstate New York, mad that the colonists took his head! Moreover, he/it wouldn’t be sated until he got his head back–no matter how long it took to get it back!

As a kid, that was frightening! Like I thought he could get me or anyone I loved! This is one of the reasons why I supervise what my children watch on television and let them ask any question about what they are watching. It’s necessary. The fact that Washington Irving created this, is one of the reasons why I am a believer that all writers are off-beat: writers think about the things most people don’t think about or dare consider. The impact of this almost two-hundred year old story was so significant, that it was an influence in me reading and writing more than the usual kid.

I think the lasting impact of Washington Irving’s work is that the literate American nation still talks about it! We still reference it in popular culture. The collective nation still knows of the Hessian mercenary that was killed by the [now] American colonists via cannonball. We know his head was blown off! Those familiar with the story know he still hasn’t found his head. I also know Tim Burton did excellent with this movie Sleepy Hollow more than a century and a half later.

I, like Octavia Butler before me, write about power (or are attracted to stories about power) because I thought I had so little of it. I grew up in a household that was loving and restrictive. Oddly, there were no restrictions on what we could read–within reason of course. On paper, in books, I could be whomever I wanted to be! I could transform, be up late, levitate–anything I wanted to be!

I could become a champion horse-rider who could outrun the Headless Horseman on a mare faster than his. I could become the one that found his head to send him back to Hell!

The long-lasting effect of this story?

I suppose it’s the fact I became a writer too. How fitting.

One thought on “The First Thing That Scared Me: The Legend Of Sleepy Hollow by Washington Irving (1820)”