The thing about cancelling problematic celebrities is it doesn’t solve anything. It is the equivalent of putting a child in time out. You give a consequences to child for behavior … END_OF_DOCUMENT_TOKEN_TO_BE_REPLACED

James Baldwin said it best: “As long as white Americans take refuge in their whiteness…they will allow millions of people to be slaughtered in their name.” During 72 hours, there … END_OF_DOCUMENT_TOKEN_TO_BE_REPLACED

The Movement is now a buzzword. It’s a cliche, much like it was a half-century and more ago. The thing is, by nature of the word, movement is not never … END_OF_DOCUMENT_TOKEN_TO_BE_REPLACED

There are moments where I cannot believe that this country is not scripted. There are times where I cannot understand how we as a nation have gotten to the point of such apathy and dress it up in patriotism. Clearly, that’s where we are now.

The program implemented by President Obama is now threatened because there’s a child on the throne of the nation…when this nation has had no King since its inception. It is madness. Complete madness.

This information is taken from the site from the Legal Support system  at UC-Berkeley:

Deferred Action for Childhood Arrivals (DACA) is a kind of administrative relief from deportation. The purpose of DACA is to protect eligible immigrant youth who came to the United States when they were children from deportation. DACA gives young undocumented immigrants: 1) protection from deportation, and 2) a work permit. The program expires after two years, subject to renewal.

What has been tip-toed around this issue is that fact no one in this country is native to it. As in, every one, that was not a Native American, the indigenous people of color whom inhabited this land before Spaniard conquistadors or European settlers, was or has been brought here:  either under duress, stress, fear  or volition.

However, even looking at the recorded history of Latinx/Hispanic/Chicano influence in this nation and simple geography, you cannot deny that there was land that belonged to Mexico and Spain that the United States folded into the batter known as the union.

So, for those paying attention, the government of a nation of immigrants, wants to put out immigrants, of whom we stole and usurped their land, because we don’t want any immigrants.

And whom is this we? 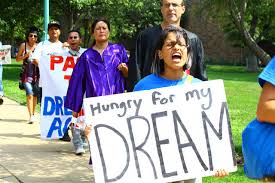 This week when the evil Keebler elf posing in the body of the Attorney General, announced the decision on DACA, there could not be a happier person. It’s repulsive. As I say often in these matters, watch whiteness work.

There is nothing about this that is lucid. It’s based in fear, power and control. It doesn’t make sense. It will never make sense.

Being a St. Louis, MO native, as big as this city is, with as many separate neighborhoods, with different nationalities carving out cultural niches, but  the city itself as a whole, is not a sanctuary city.

Meaning, even with all of St. Louis’s boasted diversity in its vox populi, if you are an ‘undesirable,’ there is nothing or no one that can save you.

It makes me wonder if the world-famous Saint Louis Cardinals catcher #4 (currently Yadir Molina) was an ‘illegal immigrant’ would the city care and do something?

And that’s a maybe.

We resist because if we don’t the pain of helpless will overwhelm us to kill everything that breeds hope and change and love on the outside of us. We must resist. 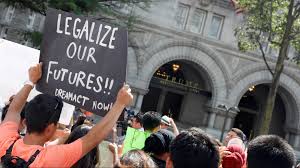 Not only do you have to leave all you know, you have to go ‘home’ to a place you have never known. You have to forfeit all you have build and building because someone with the power to legislate but not empathize and be at the mercy of their continuous bigotry.

Yet, this is the nation they long to stay in. This is the nation that allows me the right to say what maniacal, evil, bullsh!t this really is. The ‘President’ handed out food and supplies in the city of Houston, Texas, a city that has a population that will be most traumatized by this legislation, and turned around and did it because he’s at his core, a callous bigot.

My husband and I tell our daughters, our godchildren, that you treat people as you want to be treated. We tell them that even when or if you encounter someone that is different, you treat them no different. It is the acceptance of diversity that makes this nation amazing and life so, so rich and worthy of exploration.

Just because something doesn’t touch you or affect you directly doesn’t mean it doesn’t touch and run over other people. You don’t give the privilege of not turning around and seeing what happens to other people. That is just how evil persists when good people do nothing.

Don’t do nothing. Resist.

What happens when it’s so much easier and safer to faint?

With all the running and saving and doing for at times for the thankless and crazymaking, that is commonly referred to as ‘the work’, burnout is inevitable. It’s inevitable because the human condition is fragile.

Because we tire, we ache, we run out, we run dry, we get frustrated, we dislike people, we argue, and we get so tired of being strong. We get tired of being the resourceful, the civil ones, the damn adults in the room and in conversations on a constant basis.

We get tired. It gets tiring.

Indeed it is daunting to be an adult.

In caring for others, we often forget to do the same for ourselves. We forget to take time to enjoy the sun, the moon, the flowers, love and the stars. We forget what good there is, remains in, the world.

If we faint not.

Remember that even the strongest warriors must rest, they cry, they eat, the laugh and they continue to live. They must live, not to continue to fight, but to enable those that follow not to die in that fight, that fighting.

That word implies choice, it invites focus, and the implementation of wisdom. You must be able to see to it that you care for yourself,  for if you don’t you can be of no use to yourself, let alone anyone else.

The work, the movement, service is never done in a vacuum. I cannot be done alone, it cannot be done thinking you can do it alone. The load is too great, and journey too long.

There is a harvest, and return on all that you have invested. For every drop of sweat, every ache, every curse word, every time you wanted to walk away and never come back, every ounce of you donated, stolen and sown…there is an expectation you are owed something for your work and it is coming…it must come.

You have worked for it…it hasn’t been given to you.

Before you quit, remember what piece and peace are owed.

You won’t die, not here, not in this.

You’ll live because now you know how.

When I was a kid, I loved the month of February. I loved Black History Month. The most vivid classroom I remember, was Mrs. Annie Green. Her room was always covered in books, and posters, and in February? She had these icons of African-American history stapled above her blackboard. It was in her class that I began to become ravenous about African-American history. And it was in her class that I was introduced to Ida B. Wells Barnett.

I admit it…I was saturated with her. I called her one of the Faithful Four. Those four:

This was one of the main reasons I ran after history, and soaked it up. There HAD to be more black people that did great things besides them. Ida B. Wells Barnett, I knew the basics about her. She was born right before Emancipation. Her parents died of yellow fever. She raised her sister. Helped found the NAACP. She was a writer. She married a guy in the newspaper business and died in Chicago.

It wasn’t until I got older that I dug into her life, and could appreciate everything that she did. She wrote about lynching, oppression, economic disparity and white supremacy. She wrote about women’s suffrage. This is a time where it cannot be overstated that my ancestors weren’t supposed to read, let alone be college educated and be able to relate and relay an experience! Granted, she was educated initially during Reconstruction, and then at Fisk, but I had to embrace what it is that she did. And the time that she did it.

The sheer fact that she existed, and made her words the this wielded machete that laid a path for other women of color to see. I saw the work she did and revered her. I saw her boldness as archetype, and thought if I could do an once of that…it would be magnificent.

If I could harness that passion to say what I need to say no matter who didn’t want to hear it, harness that collective energy to effect and affect change–how awesome would that be?

In this time of forward moving, I use her as reference, as anchor, and as hero. I remember that this talent is both gift and weapon. My observation and recording is my armory and words my arsenal. From that, I reveal, revel, mourn and conceal. Nothing can be hidden from the observant.

I embrace the weight being a writer, an activist, comes with. It grants me a peace that I believe my foremother Ida  had:  Someone has to tell the truth, might as well be me.